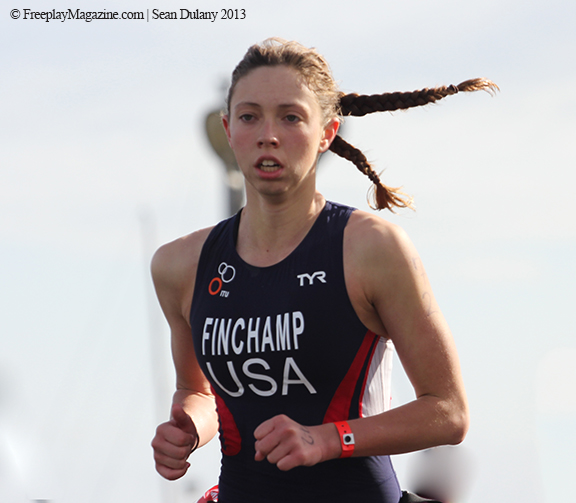 At just 17 years of age, Hannah Rae Finchamp has already accomplished more in her young triathlon career than most athletes could ever dream. In 2012, Finchamp won the overall amateur titles at both the Xterra National Championship and Xterra World Championship, and also placed 8th among a very competitive field at the USAT Junior Elite National Championship on the road. And she’s already off to a strong start in 2013, taking the overall amateur female win in the Escape from Alcatraz Triathlon on March 3. But Finchamp is far from done. The talented Altadena, Calif. native has lots of work left to do, she says, and many years of triathlon ahead of her. As a LUNA Pro Team amateur development athlete for 2013, Finchamp heads into triathlon season with a jam-packed racing line-up, some big goals, and a patient, positive outlook on what lies ahead.

Freeplay: How old were you when you first started competing in endurance sports?
Hannah Rae: I started running races at age 9 and triathlon at 10. I initially started with on-road triathlons, and then I read about off-road triathlons and decided I wanted to try that. I had to start with shorter distances, and was just waiting until I met the age requirement (15) to do a full-length Xterra.

Freeplay: At such a young age, what motivated you to get involved in endurance sports?
Hannah Rae: I originally played soccer when I was really young, and I loved the running aspect. I never got tired. So I went to a running race, and then at one of the booths they had a sign for a triathlon, and I saw it and told my mom I wanted to try. So I went to a camp to see what triathlon was all about, then did a race, and have been hooked ever since.

Freeplay: Is there any certain aspect of triathlon that you like best, or any part that provides a particular challenge to you?
Hannah Rae: My passion for triathlon is really about the whole package. While I started out by running, triathlon is my main sport now. I do both on-road, draft-legal racing with USAT as well as the off-road, and in both cases I really just love putting all three sports together. People think triathlon is swimming, biking and running, but really it’s swim-bike-run. It’s about how you put it all together. Many people don’t really understand that element until they do it, and get off the bike and see that, “Wow, the run is literally right after” — and it’s a whole new challenge to do that.

Freeplay: You have a lot on your plate with an extensive training, racing and travel schedule while continuing to be a high school student. Is it challenging to make it all come together?
Hannah Rae: It is challenging, because being a student is kind of a full-time job in itself. It’s really important to me to keep my grades up, so that’s top priority. But training is what I enjoy doing, so it’s how I spend my extra hours. After school it’s off to running, or it’s off to swim practice, or biking… whatever it may be. But for me I want to spend my time training because that’s what I love. So I don’t have a lot of downtime, but I like it that way.

Freeplay: Similarly, what is race travel like for you? Do you have someone that accompanies you to your races? How do you manage such a busy travel schedule?
Hannah Rae: Because my travel schedule is so full, I have to have almost every detail planned out. My season is is jam-packed with a lot of travel and quick turn-arounds, but luckily I love to travel. One of my dreams is to travel the world doing triathlon. I’d love to do the Xterra World Tour in the future. Up to this point my mom has always traveled with me, so it’s been her and I. She is so supportive of everything I do. 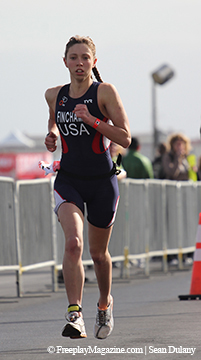 Freeplay: What will your competition schedule look like this year? Will you again be combining both off-road and on-road triathlons with cyclocross?
Hannah Rae: As far as Xterra, I plan to make the regional Championship competitions, including the East, West and Mountain Championships. Then assuming all goes well, I plan to race Nationals and Worlds. I will also do the on-road Junior Elite Circuit, which includes races throughout the country. So I’ll be balancing those two all throughout the summer. Then cyclocross comes in almost as off-season training for me, so I add that in later in the year.

Freeplay: Given your extensive background in triathlon, why did you decide to make cyclocross a part of your competition year? How has that experience been for you?
Hannah Rae: I just started taking cyclocross more seriously this past year. I first started it when biking was kind of a weakness for me, as a way to improve my strength. It has totally changed my biking ability, and it’s been a huge benefit for me. This past season I competed at Nationals in Wisconsin, which is where I first met the LUNA Pro Team girls, and it was like a dream come true being there with those girls (as an amateur development athlete) and getting to meet them. I have always so looked up to the LUNA ladies, and being able to share in their wisdom and experience there was just amazing.

Freeplay: Going forward, what are your long-term triathlon goals?
Hannah Rae: In the long-term I really hope to turn pro and race for the LUNA Pro Team if that’s a possibility. I really see myself doing triathlons for the rest of my life, so at this point it’s about improving every season so I can hopefully one day make triathlon a livelihood. A lot of people would say triathlon is not just a sport, it’s a lifestyle, and I’d love for it to be that way for me as long as possible. … But because I’m just 17 and I’d like to go to college as well, I’m not in a hurry. My goal is to find a school that will support me academically as well as in my triathlon pursuits, so I’m maintaining amateur status until I decide exactly what I’d like to do. I may decide to cycle, run or swim (collegiately), or do triathlon if that’s an option. So there’s no hurry to turn pro. I’m very excited for whenever that may happen in the future, but it’s not something I see myself doing immediately.

Freeplay: Reflecting on last season, give us your run-down on how you thought it went, and what it means for the future. Is there a sense of pressure this year after all your successes in 2012?
Hannah Rae: Last season was definitely a huge season for me, I feel like every season so far I’ve been blessed enough to improve and gain places and drop time. I did not go into last season thinking I’d win the overall at Nationals and Worlds. It did come as a big surprise, so it was huge in that respect. I feel like triathlon is something God has truly blessed me in, so I really try to treat it as a gift and not take it for granted. Having won last year I think gives me incentive for next year because now I have something to defend. It’s definitely more a sense of incentive then pressure. Obviously having won it once of course I will go in wanting to win again. But that’s one of the great things about triathlon is there’s so many different elements; so many things that can change each time, so many things that can go wrong or go right. It’s so circumstantial. But as long as I give my all I think that’s all anyone can ask for and expect really.

Freeplay: Do you have any advice for other young athletes looking to get involved in triathlon?
Hannah Rae: I think most important thing when it comes to triathlon, because it’s such a high-intensity sport, is to make sure you are having fun. The races you do best in are the ones when you’re having fun. So if you ever feel stressed or overwhelmed, take a step back. Have fun, and go for it!