A Race Is a Race 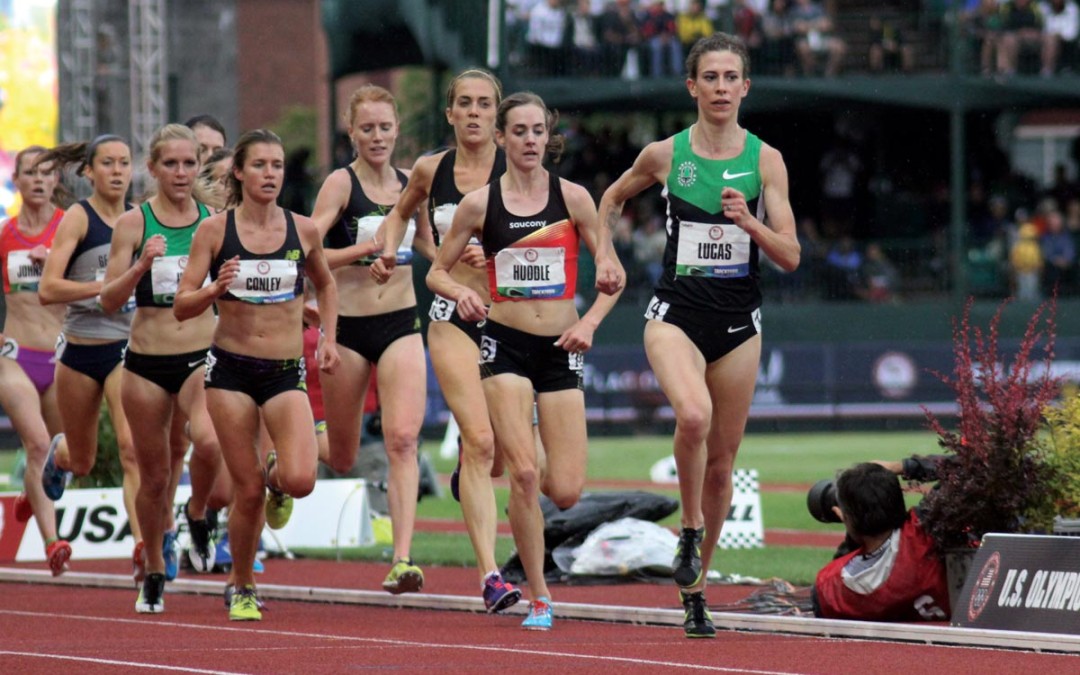 “A Race Is a Race” is a featured article from the March/April issue of Freeplay magazine.

I remember every step of the 2012 Olympic Trials 5k. It was the pivotal race, the one the last 15 years of training had been leading up to, and faraway the most visible, with 20,000 in attendance and another 4.5 million watching at home. It was the race that would crown me Olympian or leave me at home. So, it may not seem surprising that I can remember those 15 minutes and 19.83 seconds so well, that I can drop back into that race whenever I like. But, I was surprised.

When a race ends, I typically don’t remember much of it. I remember standing three paces back from the start line and smoothing my hair, smoothing my jersey. I remember fixing my eyes on the red track in front of me and letting my face go slack. “Runners on your marks,” and we prance to the line, then freeze deep in running-mime. And I remember the gun and the first silent moment of pushing my weight into the chaos of bodies. But, whatever happens between then and my oxygen-deprived staggering on the other side of the finish line is a blur.

It’s not just that I don’t remember it, though. It’s like I was never even there. It isn’t me, that hard body rounding the track, it’s some instinctual, animalistic sub-me whom I don’t totally understand. It’s the me I send out there to run faster than I can run, to do things that don’t seem reasonable. So, I don’t question that I don’t remember the race. I, my fallible and doubting self, take leave of this body and send it out with the unreasonable instruction of doing well-trained, super-human things. And, in its dumbness, it succeeds.

This body, it is disciplined even in what it can hear and see and feel. I don’t hear the loudspeakers bellowing my name or the swelling roar of the crowd. But I do hear my coach, speaking soft and low 7 lanes away. I don’t feel the dripping gashes in my shin from my competitors’ high spiked back kicks in the close-pressed pack. I don’t know how it happens when the finish line is suddenly in sight and pulls me towards it, no weaker than if I were lassoed and jerked at the waist, somehow a kick I didn’t know was there is yanking from this body. I can’t take credit for it and I can’t explain it. Occasionally, I can summon back a moment, a flash of a jersey, the feel of another body invading my space, or sudden sound of a bustling fall, pulling me out of the moment, but even those seem like memories of watching myself. 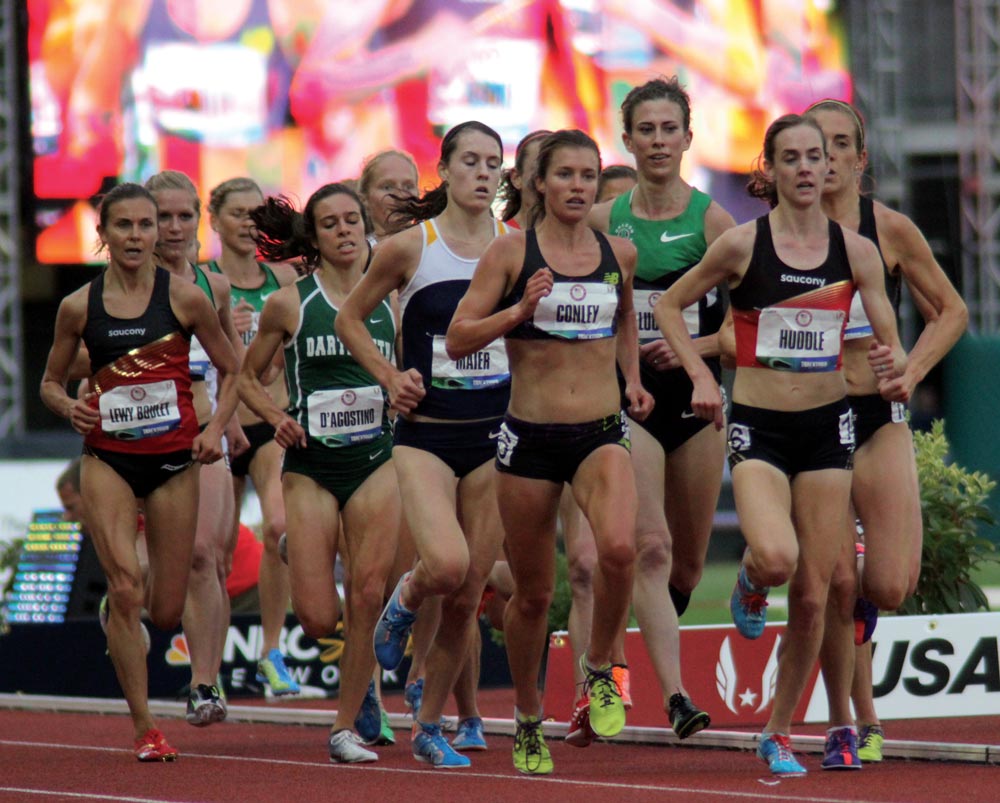 The Olympic Trials, however, were different. I remember my frustration at the crowding in the pack before I made my breakaway. I remember seeing myself on the Jumbotron, my eyes looking far right, to the huge pixilated me, away from the camera directly ahead. I remember my surge to the front with just over three laps to go, and the crisp sound of my own feet off the rubber, leaving the frantic bustle behind me. The chest-beating freedom as I looked up at the crowd with a lap and a half to go, no one in my way, their cheers only for me. And I remember the feel of that first hitch in my stride. My melting strength and the descent of gravity, as I left the near curve with ¾ of a lap to go. I remember the reemergence of footsteps behind me, louder and louder until two bodies passed, so quickly, with a ½ lap to go, and took my last bit of lift with them. And the whole world slowed down, and in the final straightaway the cheers finally faded from my ears into cottony silence, and my eyes fixed on a finish line that I pulled and coaxed and just would not come to me. And I remember the falling weight of another mass drop past me in the very last step of the race, and with it went my Olympic spot. 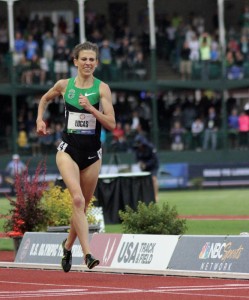 A race is a race. Every race is a race, and just a race. Some people, wiser than me, make that distinction easily. But, for me, it’s been a hard lesson. That race did not end my career, but it did change my trajectory, and momentum is powerful. Momentum drove Kim Conley, who beat me out for the final of the three Olympic spots, to a reinvigorated career, and a new spot at the top of the US rankings. And it left me dazed, stuck in one life moment, and I never quite broke from those spiraling rails.

Running has been my guiding light, my source of income, and my method of understanding a confusing life. Since I was 14 years old, it’s been my world. I am not the one-dimensional athlete you may be picturing when I say that. I love family and friends, reading and writing, exploring and art and food. But, running is the lens through which I interpret the world. It contains every allegory and tool and solution.

And so, as I emerge from a career that ended not as I would have liked, disappointed with what could have been and almost was, I still look to running. It is not how I earn my living anymore, and that is jarring. Being the fastest that ever was is no longer my every waking dream and what sends an adrenal rush over my head and into my fingers many times a day. Those things I will leave to my competitive career, ages 14-30. But, it is still where I find solace, understanding, and wisdom. It is only after a run that I can think on a razor’s edge. It’s only through a run I can calm the frantic midnight worries of what to do with my life. And by my lessons learned through running, I know how transformative work, belief, patience, and wild optimism can be. On a run I am bigger and stronger and more capable than I could ever really be otherwise. A race is just a race, but running can be anything.

This online version of “A Race is a Race” is the unchanged and original piece sent to Freeplay magazine by Julia Lucas. This version will also be available in the digital issue of Freeplay. 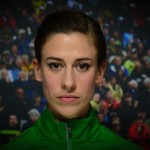 Julia Lucas graduated from North Carolina State University (NCSU) where she majored in linguistics. Lucas competed in track and field while at NCSU and as a professional runner for The Nike Oregon Track Club and Team USA. Lucas has run a 15-minute, 8-second 5k and a 4:05 1500-meter. She was a 2012 Olympic Team alternate. Now she just runs circles around New York City. She is working on her first book. 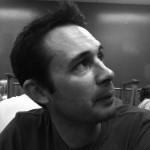 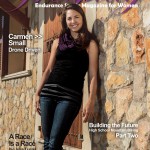 Subscribe to Freeplay for more stories on the endurance lifestyle.