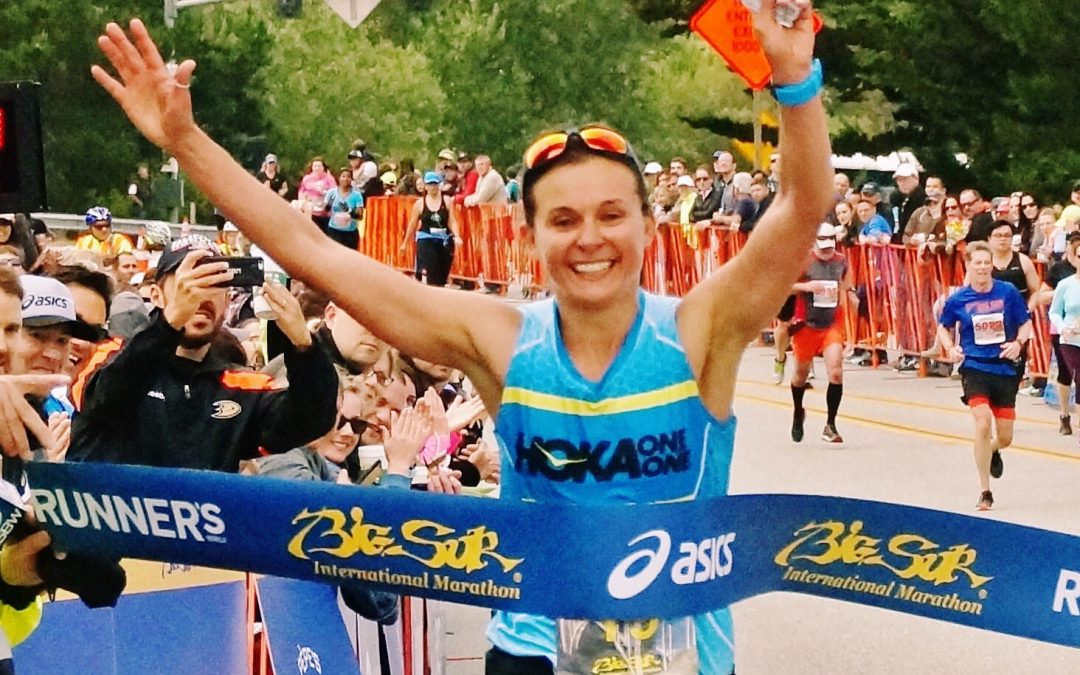 The Big Sur International Marathon is known for its hills – and its wind.  Today’s conditions were among the most challenging in the event’s 31-year history.  Gusty headwinds of up to 25 mph greeted more than 7,100 runners taking part in today’s six race distances.

Despite the challenging conditions, local runner Adam Roach, 32, stayed strong to win his fourth Big Sur title, a record surpassed only by one other runner, Brad Hawthorne, from the early years of the marathon.  In addition to this year’s victory, Roach took the title in 2012, 2013 and 2015. His 2016 time was 2:35:36.

Remarking about the conditions Roach said, “It’s always really windy from 5 to 9 (miles), but at Hurricane Point the wind came swirling off the hill. I felt like I was going to fly into the ocean it was so strong.”

But Roach and two others runners, Justin Patananan, 35, of Lancaster, CA and Jason Karbelk, 29, of San Francisco stayed close for much of the race, with only one second separating them until mile 22. Roach and Patananan battled until the final miles, but ultimately Roach won by just over a minute. Patananan was second at 2:36:41 and Karbelk third at 2:38:31.

Olympic marathoner Magdalena Boulet won the women’s race with a time of 3:01:27.  A ten-year veteran of marathon running, Boulet transitioned to running trail and ultra-distance events in 2013 and won the famed Western States 100 in her debut appearance in 2015. In her training for this year’s Western States she decided to run Big Sur, saying she “took advantage of running 26 miles on a gorgeous course.

Along their 26.2-mile route north, the leaders joined participants in the 21, 10.6 and 9-mile distance events.  A four-person marathon relay and 5K run were also held on the scenic Highway 1 course.

A tenth of the marathon field competed in Monday’s Boston Marathon and traveled to Big Sur for the Boston 2 Big Sur Challenge.  Runners are ranked by combined times of both events and this year’s B2B winners both hailed from Australia.  Neil Pearson, 43, of Sydney, who came in seventh in the marathon, had a combined time of 5:25:07 to take the male title. Elizabeth Pittaway, third in the women’s marathon, took first in the B2B with a combined Boston-Big Sur time of 6:10:14.

The Big Sur International Marathon is a “bucket list” race for many, and is a popular destination event.  Runners from 49 states and 37 countries travelled to this year’s event.  The marathon is held the last Sunday of April, but marathon slots are determined the previous July through a random drawing process.

More information and race results can be found at www.bsim.org