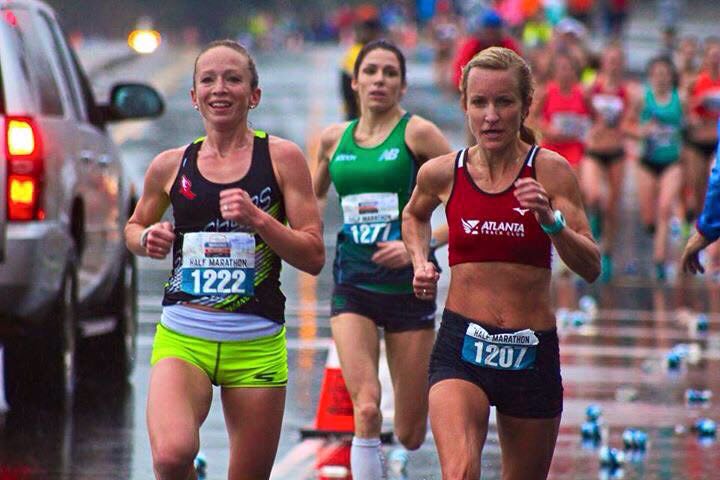 Esther Erb Atkins’ running career has been on a steady climb since her days at Case Western Reserve University where she was a 6-time NCAA All-American. The 2016 Olympic Trials qualifier won the US Marathon Championships in 2014 and holds a marathon personal record of 2:33.15 that she set at the Boston Marathon that same year. After finishing the second half of the Boston Marathon faster than the first half she proved she has strong closing power – if she is near you at the end, consider her a threat. Look out for her at the 2016 Olympic Marathon Trials–she might just come from behind and take a top spot.

Esther currently competes for Skechers and lives with her husband, Cole Atkins, in North Carolina where she is also assisting with the Appalachian State teams.

Read our interview with Esther Erb Atkins below.

What does a typical day of training look like for you?I usually wake up to Cole’s alarm and go make myself a coffee or cup of Cocoa Elite depending on the day. Then I make my way out for training, usually Moses Cone State Park. When I get home, I’ll eat some lunch and get some emailing/housework done and then head into Boone for the App State team practice. If the team has an easy run, I’ll usually do my 2nd run with them, or if not, I’ll watch their workouts. A couple days a week, I take classes at a local ballet studio, which has been awesome for my foot strength, mobility, stability, coordination and core strength.

What key workout makes you feel race-ready?I’ve stopped assessing my own race-readiness based on workouts.  It took me a long time, but I found a coach that I trust so much: Terrance Shea. Basically when he tells me I’m ready, I know I am.  I know I can do whatever it is that he tells me I can do, and maybe sometimes a little more.

What is your favorite pre-race meal?I have developed a thing for Beef Pad Thai the night before a marathon.  It started with a cheap little takeout place in Boston called Pad Thai Cafe on Boylston, that I discovered with Sarah Crouch in 2012, the night before we both ran 5k PRs at the BAA 5k.  Since then, I’ve always had Pad Thai before every major marathon (except the World Championships, since it wasn’t available, but I had basically all the same ingredients).

Describe a perfect recovery day. What do you love outside of running?

Sundays have stopped being my long run day when I’m in Blowing Rock, because I attend a little Episcopal church called St. Mary’s of the Hills.  I also keep up my singing with the exceptional choir there, and since we have rehearsal and sometimes afternoon services after the morning service, it can sometimes be an all-day affair. Luckily my schedule during the week is super flexible, so there’s nothing that says I have to attend the Church of Sunday Long Run. The other thing I love to do when I’m recovering is write training for my private coaching clients and be available to the athletes on the Appalachian State Cross Country team for questions and support.

What is your favorite race memory?
That’s a tough one.  I’d have to say that my top 5 in chronological order are:

You are sponsored by Skechers. What do you love about them?Skechers (no T in the brand name) has been great to me! I was already committed to the New York Athletic Club and had just recently been accepted as a full member when I started looking for a shoe sponsor, so leaving that affiliation was off the table. Skechers has been very accommodating to my unique situation.

The thing I love most about representing Skechers is that because of their relatively new entrance into the performance running shoe industry, I really feel like I am personally making a difference in establishing their foothold (no pun intended) in the performance arena. I feel like no other runner in recent history has made the kind of impact on a shoe company that Meb was able to make for Skechers Performance. I feel like the rest of us are there to expand upon the difference that Meb has already made.

If you could give a life mantra, what would it be?A year ago, I actually had my life mantra tattooed on my left wrist as a reward to myself for winning my marathon title. It’s simple. “Aus Liebe” is a phrase that comes from a gorgeous soprano aria in J.S. Bach’s St. Matthew’s Passion. The entire phrase means “out of love my savior is willing to die.” My interpretation is that if Christ was willing to die out of love, what can we not do out of love? So my goal in life is to approach every decision I make and everything I do “aus Liebe” – out of love.