If you want to know what it is like to run a race with 6,000ft of climbing, on very limited training with injury, please continue reading.

I started the race off just as planned: EASY. I made sure to position myself behind a group of people where if the pace felt too easy, then it was perfect. I felt really good with where I was running. I didn’t feel like I was straining and I made sure to check my breathing rate often to make sure I was never going anaerobic on any the hills. A group of four of us found each other around mile 6.5 and all started chatting. Two of us were nursing injuries, one had been sick all week and the other guy said nothing. I am sure he thought we were all psycho for even being out there! But then again, he is an ultra-runner, too. We’re all a little weird. 🙂 We were having a blast keeping the pace lax, and chatting away about races we had run. When we came into the first aid station at mile 9 it was a bit chaotic and I could’t find any of them when I was ready to leave. Also, Coach Dad decided to tell me I was in 10th position. Considering I am not competitive at all (major sarcasm), this race just got real. Since I couldn’t find any of my new buds, I set out solo. Thankfully, two of them were not far behind me and we regrouped. One of the guys, named Aaron (cool na 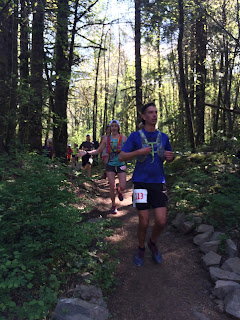 me, bro!) decided it was time for him to take off and left me and my new friend Summer to run. Her and I were clipping right along. We were passing people, chatting and really having a good time. I informed her that we were top 10 and we made a goal that we would finish this race that way.  She pulled ahead just before we came in to the second aid station and I never saw her again.  Good job opening your big mouth, Erin. (She ended up winning like a total badass!) 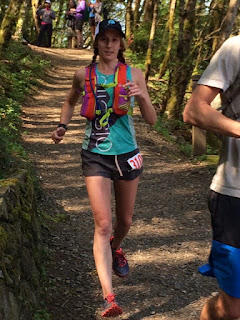 At aid station two Coach Dad told me I had moved from 10th to 5th.  Things were really real now! We started a section of the course that was a 2-mile stretch on the road, exposed to sun and my quads had already started pushing me into the pain cave. This was probably the one of the lower mental spots that I hit along the way. I knew a lot of people would take advantage of the flat and try to push their pace. I decided to chill because I knew we had one heck of a climb ahead of us and if my knee and lack of fitness was going to get me to 31 miles, I needed to play it smart. Now, that pain cave I mentioned, it came on QUICK. Every muscle below my hips decided to join in and collectively they shoved me in head first. My hips had really started to tighten up and I had to walk a lot of the steep sections of uphills. On top of that, I had gotten really sick to my stomach after drinking half a bottle of electrolytes, taking a energy gel and some salt. I was trying to be proactive but think I may have over done it a little by taking it all at once. After about a mile I started to feel a lot better and was back to rolling along. I was running alone and decided to turn on my Ipod for a little extra motivation. I got some Ginger Ale at the next aid station and began the climb from hell. Literally, it was THE single hardest climb I have ever been on. Not only was it from mile 25-28, but it was STEEP. 1500ft steep to be exact. It was technical, some sections muddy (waterfalls!!) and switchback after switchback. Now, I know some more ultra-runners are probably laughing at this. But let me tell you: pain cave+ steep+long+ lack of fitness = a tough 3 miles up. I caught myself a few times whispering under my breath “Screw this!” I was legit angry at myself; and the hill. It seemed to go on forever. I have never been so happy to be at the top of a damn hill!

You have to see it to believe it!

Then started the decent. Equally as long and equally as steep – I had to pop my ears twice! I think if my quads could talk they would have said “YA, SCREW THIS!”. I was hurting bad. I couldn’t think of anything else except the finish line. I was running in 5th and was doing everything I physically could to stay there. I may or may not have even made some loud grunting noises at times. You will never know. At mile 30.5 another girl came dive bombing passed me. CRAP. As she went by I made an attempt to go with her but as soon as we started up another hill my legs protested heavily and won. My body was failing fast. I had gotten sick to my stomach again during the climb and hadn’t been able to get down any form of fuel and was barely even tolerating water and Ginger Ale. I knew I was depleting. I was having a hard time lifting my legs high enough to clear the rocks on the trail. Still, I was pushing with whatever my body would give me.  As we rounded the lake I was legitimately worried I was going to have to walk in. I had never felt my legs crash like this. I looked back and saw one guy and another girl not too far back. I told myself there is NO WAY I am getting passed again with less than a quarter mile to go. I “kicked” with whatever my legs would give me. I managed to secure 6th place and proceeded directly to the trash can and threw up. I haven’t thrown up from a race since college. I don’t recommend it. Coach Dad kept asking how my knee was and all I could do was stare at him. I was dizzy and slightly afraid. I couldn’t talk, nor did I want to in fear of vomiting all over his face. Not my best moment! 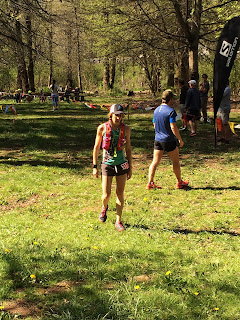 I was finally able to sip on some Coke and eat a few oranges. Our flight home was that evening so I hobbled to the car to get changed. It probably took me about 30 minutes to do so since every time I bent over my hips cramped and every time I tried to walk without my shoes off my feet cramped. It was a good source of entertainment for Coach Dad, and an awful source of pain for me! We didn’t have a lot of time to get to a shower so I grabbed a water bottle and some baby wipes and did my best. Later, after we dropped of the rental car, we learned that our flight had been delayed 3 hours. AWESOME. Who doesn’t love to sit in their own funk. After dropping Coach Dad off at his house I got home about mid-night. I went straight to the shower and then straight to my bed – which I didn’t get out of until about 10:00 am this morning because I was afraid of what might happen when I tried to walk. My hunger finally outweighed my pain and I had to get up. So here I am now eating some toast and telling you my story!

I know a lot of people are judging me for even running while hurt but I don’t care. I don’t  mean to be rude, but I have my personal reasons for starting the race. I didn’t decide to still do the race “just to do it.” Sure, being that it was a lottery played a role in my decision but the real reasons I will keep to myself and say that I got out of the race exactly what I went in looking for. I am proud of the way I handled the race. Even though I let myself get angry and frustrated, I never stopped moving. I kept going, I kept pushing and nobody can take my smile away from me.