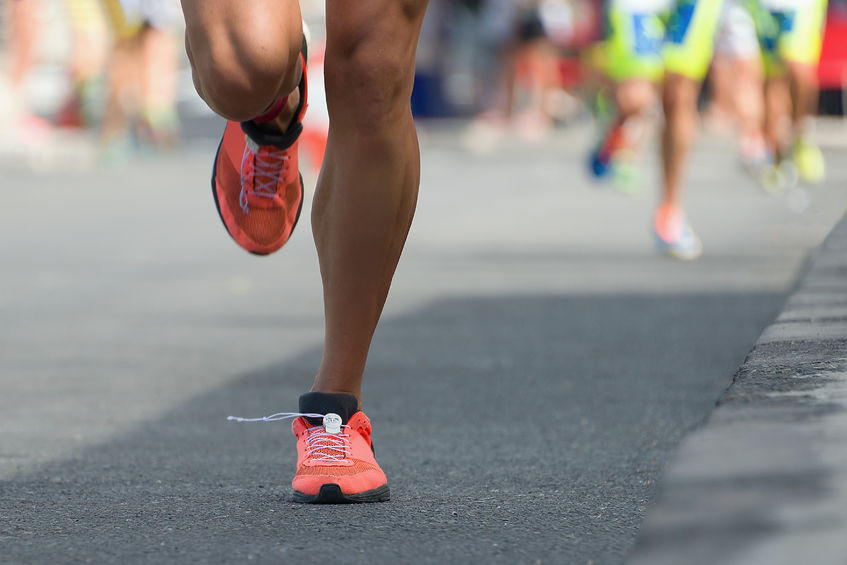 Running a marathon or a half-marathon is just plain hard. Whether you’re an elite or a first-timer, moving forward by your own propulsion for 13.1 or 26.2 miles is no small feat. While you’re out there on that course chipping away at your goal and your super secret goal (you know you have one), there are thoughtful efforts happening behind the scenes of your journey that are making your experience that much more meaningful. The Tri-City Carlsbad Marathon was the first marathon I ever ran, and thank the stars for that, because without their support, on and off the course, I don’t know if I would have made it to the finish line. If you’re looking for a 2017 race, here are 10 reasons why the Carlsbad Marathon or Half Marathon should be at the top of your list.

2. Timing – Carlsbad always falls in the first month of the New Year – providing a perfect chance to hop right on to that resolution. A January race is also ideal in terms of training in that it allows for longer runs in cooler fall weather. Speaking of weather…

3. Weather – In this day and age, runners have their choices of marathons, but there are not a lot of winter races that can almost always promise sunny skies and shorts weather. As a Carlsbad local, I know I take this for granted but I’ve heard stories of races where temperatures were in the low 20s and mittens were worn…for the whole race! Not in Carlsbad.

4. Location location location – At the start of the race, in the wee dark hours of the morning, there’s the typical view of any race start:  banana peels on the ground, tinfoil clad silhouettes wandering aimlessly about, the ponytail of the runner standing in front of you at the Porta Potty. But once the gun goes off at Carlsbad, things start to change. The sun awakens as runners loosen their legs through the winding streets of Carlsbad Village. Then, at mile three, like the sudden switch to Technicolor in the Wizard of Oz, the vista opens up to the stunning view of the Pacific, one that will be with you for miles up and down the coast. I’ve lived by the Pacific for most of my life and it never ceases to take my breath away. It’s this beauty that will carry me on the way back up the coast when my legs have other plans. 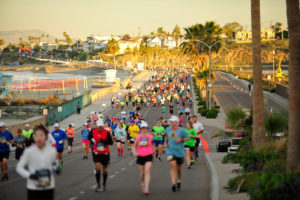 5. In Motion Fit: When I set out to train for the Carlsbad Marathon I didn’t have any idea how to prepare for this distance, what to eat, drink, or even if it was a humanly possible endeavor. All worries were cast aside when I learned that In Motion did more than put on the race but also offered an extensive training program called In Motion Fit, run by Flanagan’s daughter, Katie, along with a team of experienced coaches. Their program is tailored to the marathon junkie and the newbie. Anyone who wants to take on the challenge of a distance event is treated to a fun group specialized in helping you reach your goal, whatever it may be and for whatever reason.

6. Run for a Cause – I guess this begs the question…Why would anyone seek to run an unusually large amount of miles without being chased? The answer is different for every runner: a lifetime goal, a change in fitness, or a chance at a PR. In Motion also offers its participants the chance to run for those who cannot or for those facing serious challenges. Athletes can choose from a host of causes that resonates with each individual.

Even before you hit the course, In Motion is working to give back to the community with Fit Cares. Fit Cares taps into the knowledge and enthusiasm of its In Motion Fit training team to help those in need. For example, this month Fit Cares is asking its team members to “Scare Away Hunger” in supporting the North County Food Bank in collecting jars of peanut butter before each training run to be donated to children living in poverty in North County.

7. Triple Crown Option – Some racers look to the half or full marathon to check a bucket list box. In 2008, In Motion decided to provide something for you overachievers, The Triple Crown Series. Racers can kick off the year with the Carlsbad Marathon or Half Marathon and then follow it up by completing two other local half marathons; the La Jolla Half Marathon in April and America’s Finest City Half Marathon in August. Anyone who finishes all three within a calendar year gets a special medal.

8. Spectator Friendly – Spectators coming to support a loved one will not be left to fend for themselves wondering where would be the ideal spot to cheer. The In Motion website has a page detailing the best spots if your fans want to be near the live music, the shops and restaurants, or where they’ll have a chance to see you speed by a few times. On Carlsbad’s course, filled with spectators cheering on all of the athletes, there is never a dull moment.

9. All the trimmings – Along with the great race booty, a two-day Lifestyle Expo, the live music along the course, and the dedicated spectators, there’s the annual Heroes of the Marathon Recognition, where In Motion recognizes five participants in the half or full marathon who have overcome extraordinary challenges only to serve as an inspiration to others in their community. In addition to honoring these special athletes, In Motion hasn’t forgotten the wee ones by hosting a Kids Marathon Mile at Legoland on Saturday that upon completion provides free entry into Aquarium.

10. In Motion Family wants to see you reach your goal – As I mentioned, 26.2 miles is a long way and there were times along that course when I wondered if there wasn’t just one proverbial wall but a number of them. What kept me going? A glance over at the endless beauty of the Pacific, a band playing some Chuck Berry, even a tutu clad spectator yelling “only one more mile!” when there were really six. Had to laugh. Once reaching the most beautiful finish line I’d ever seen, I realized In Motion’s goal is not to produce the biggest marathon ever just the best.

To register or view further details about the Tri City Medical Center Carlsbad Marathon and Half Marathon taking place on January 13-15, 2017 go to: http://www.carlsbadmarathon.com/